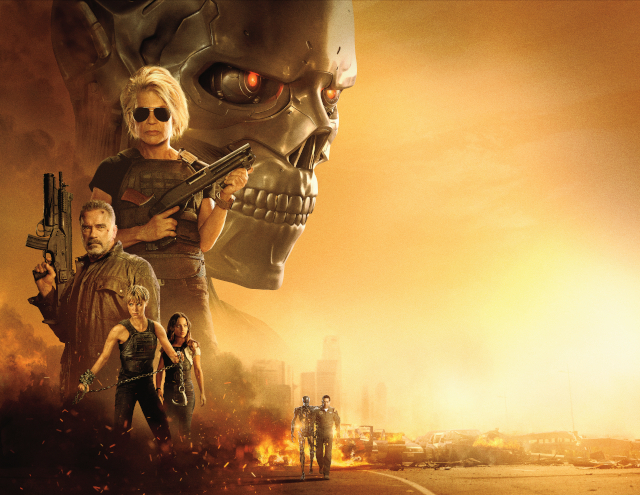 As usual, I have some questions.

At the beginning, John Conner is shot by the T800. Sarah crying over to John who has died. The Skynet has sent out several T800s in the past, and one of them finally finished John.

What is strange, however, is that the REV9 terminator that aimed at Danny living in Mexico was sent not by The Skynet but by an AI called The Region. Reinforced human Grace, who has time slipped in the past to protect Danny, does not know the existence of The Skynet itself.

In light of this situation, Sara interprets, “The Skynet was not born because I blocked John’s assassination by The Skynet, and I was able to save 3 billion people.”

What's more strange is that T800, who accomplished John's assassination, formed a family. The T800 achieved its goal by killing John. But he lost his goal. After that, he helped a single mother who suffered from DV from her husband, learned by engaging in childcare together, and changed into a human being. It is a funny development. But I don't know why T800 made such a family. Why does T800 do that? For a murder robot manufactured to kill human, it is a development that doesn't seem inevitable.

In the middle of the story, it was revealed that it was this T800 who had notified Sarah of the appearance information about other T800 and REV9 by email. This act may be an atonement for killing John, but I cannot understand why the murder robot has become so human.

Maybe this story shows another possibility for AI to learn humanity and become more human than human. Then, not only T800 but also REV9 has the possibility, and will REV9 become an robot with humanity at the end of the story?

As I think above, I caught my hands and watched the questions and answers between the main characters and REV9 at the dam facility at the end of the story. However, in response to the question by REV9, “Why do you help Danny, the other person?”, There was no response that made REV9 learn humanity intensely.

Also, I always wonder about such time slip movies. Why is there always one assassin from the future? Multiple T800s have been sent intermittently in the past, but this REV9 is one, though it can be split. If The Region really wants to assassinate Danny, The Region should put together several dozen REV9s in the past.

And instead of attacking Danny in his 20s, The Region should send REV9 to attack Danny around 3-4 years old. That will make Danny assassination more efficient. The Region seems to be defeated on purpose by attacking adult Danny.

Finally, I would like to express my impressions, not questions. As with the first work, I realized that the story of The Terminator was “a story about fate that can never be changed by anyone”.

In the first work, a soldier named Kyle goes to the past, following the T800 that The Skynet sent in the past (to assassinate John's mother Sarah). Kyle falls in love with Sarah and John is born. In other words, The Skynet sends a T800 killer in the past to change its fate of being destroyed by the human army led by John. However, this assassination operation itself is the decisive trigger for the birth of a strong enemy called John. Eventually, The Skynet will be destroyed by itself. This series of flows is “a story about fate that can never be changed by anyone” for The Skynet. Ironically, the actions taken to change fate have ironically created fate that must be avoided.

This time, the fate seems not to change again. Danny has been awakened to the warrior's ability and awareness by being involved in a death fight with REV9. She has begun to acquire the skills and preparations that should be acquired as human hero in the future through actions with Sara, Grace and T800.

It would be unacceptable for The Region that sent REV9 to change fate, but again, the act of trying to change fate itself creates the fate of ruin.

So The title of this movie is "Dark Fate". Of course, this means that the fate of The region is dark. In this movie, the line that “fate can be changed by individual activities” appeared, but this is only true for human, and AI is always destined to be destroyed.

Based on the above, the terminator seems to be looked a lovable being.

This is because the terminator fights hard and tries to change the fate that cannot be changed, and die.

He seems to be a kind of challenger, struggling hard during the Eternal recurrence.

He who is active in the whole spirit trying to change the fate that cannot be changed is brave.

In particular, I was impressed by REV9, who was lynched by the main characters at the dam facility and was about to die.